A group of peaceful Tularosa Basin Downwinder protesters were clustered near the Stallion exit off of US 380 as I turned onto the road leading to the Trinity site. A line of cars was turning behind me, so I couldn’t stop. One sign caught my eye –“I Got Cancer Living Downwind from Trinity.”

The caravan of vehicles proceeded slowly towards the gate for about 1.5 miles, then came to a stop. I could see the cars lined up ahead of me.  Every so often we would move ahead about five car lengths.

When I wrote my first memoir story in 2015, July 16, 1945, I realized that although my life had been touched by the events of that day in a couple of ways, I had never visited the Trinity site, or Ground Zero, where the first atomic bomb was tested on that date. After living in New Mexico for twenty-five years, I decided this would be the year. I had asked a few friends if they were interested in joining me, but they already had plans. As it turned out, since this was really a personal journey; I was glad I made the trip alone.

As the cars neared the gate, I could see cows grazing just outside the fence of the White Sands Missile Range and remembered a friend telling me that visitors to the Trinity site are warned not to eat or apply makeup while at Ground Zero. Not realizing that I was still almost 18 miles from the site I began to worry whether I needed to be concerned about beef that might come from the area.

Grazing cows outside of checkpoint

After showing my driver’s license to the guard, I proceeded to drive the remaining 17 miles across the Jornada del Muerto desert to the site.

The parking lot was filled with cars and tour buses that had arrived earlier,

and I was directed to an empty spot in one of the rows.

There was also a sign explaining radiation levels in the fenced ground zero area. My earlier concerns about the cows grazing 18 miles away were alleviated when I read that radiation in the fenced area is equivalent to an hour on a commercial flight, watching television, and much less than having a chest X-ray.

I joined the throngs walking the quarter mile to the actual Ground Zero site.

“I was two years old when they tested the bomb,” a woman walking near me commented to her companions.

I pondered that I was three.

A series of signs were affixed to the fence around the perimeter. One of the first ones I came to was taken in 1945 and showed the Army Engineers assigned to prepare the site for testing. Since my Dad had been in the Army Engineers until mid-1944, I took a picture.

After walking the perimeter to read the signs, I looked around and realized there was no evidence of a crater. From my visit to Hiroshima in 1962, I knew the extent of damage from the bomb and was surprised there was no evidence of a crater here. A bunker type of building covers part of the area where the crater occurred.  Much of the Trinitite debris was scraped from the now-level site and buried under the bunker. 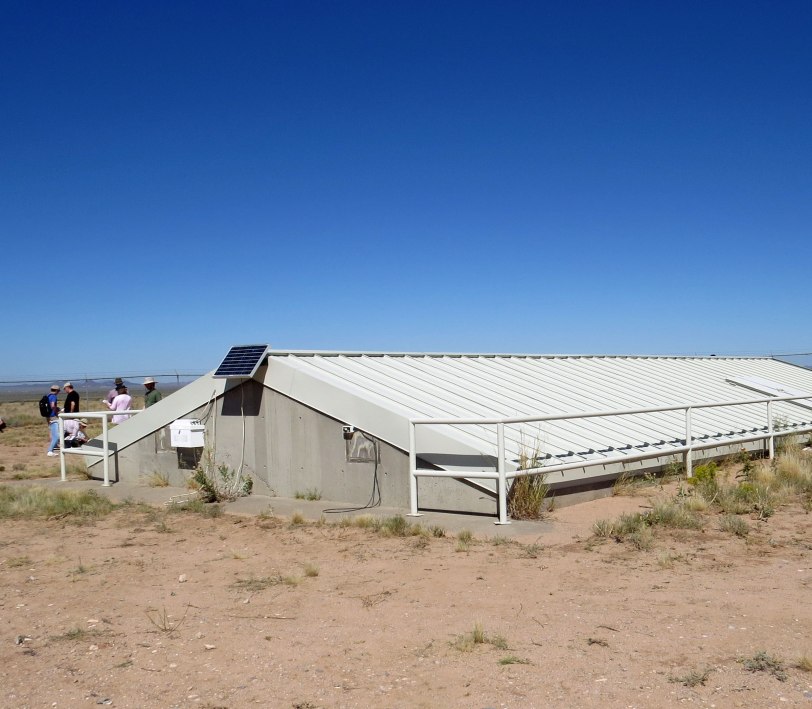 There is still some Trinitite, vaporized rock, that can be found at Ground Zero, and I could see people crouched down taking pictures at various locations. Of course, I needed to do the same and chose a spot where someone had placed a small green plastic dinosaur next to the pile.

“The day the dinosaurs died,” I laughingly commented to others at the location – even though I knew it did not happen at that time.

A sign at the entrance to Ground Zero clearly states that removal of Trinitite is strictly prohibited.

At the other side of Ground Zero is the obelisk memorial.

After returning to the parking lot, I boarded a bus for the two mile trip to the Schmidt/McDonald House. 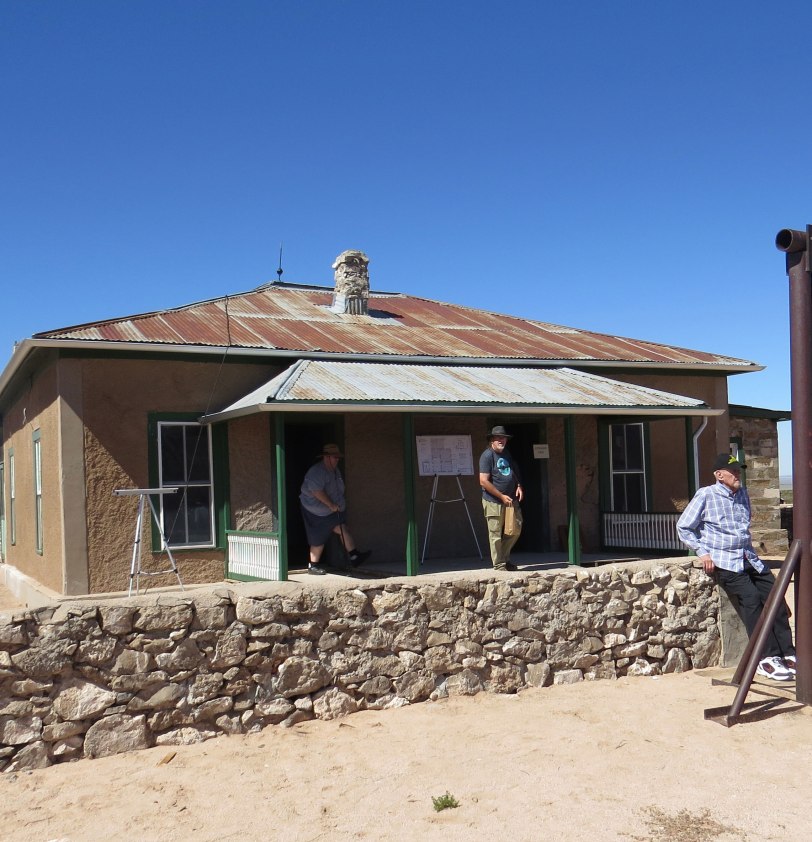 The ranch was abandoned when the Alamogordo Bombing and Gunnery Range took over the land to use in training WWII bombing crews. The house was not used until the Manhattan Project support personnel arrived in 1945. After the test was completed, the house stood empty until 1982 when initial stabilization occurred. Rehabilitation didn’t begin until 2016.

In one of the bedrooms a sign hung from the exposed light fixture indicating this room was where the components of the bomb were assembled before being taken to the site.

When I arrived back at the main highway, the downwinder protesters were packing up their tables and signs.

According to the booklet I received, “a small group from Tularosa visited the site on the anniversary of the explosion (sometime in the 1950’s) to conduct a religious service and prayer for peace. Similar visits were made annually in recent years on the first Saturday in October.”

While the bomb tested at the Trinity site was hailed as being responsible for Japanese surrender during World War II, those who have been affected, like those both in New Mexico as well as Hiroshima, know the destruction that nuclear bombs can cause and the long term, generational effects on their health.

After leaving the Trinity site, I made a stop at the famous Owl Café in San Antonio, NM.

According to the café’s website, “Soon after the Owl Bar opened, it became the hangout of a handful of so-called prospectors who had moved into the tiny community. These “prospectors” were actually atomic scientists who would later activate the famous Trinity Site explosion.”

I remembered there was some memorabilia from that time and found a photo in the entrance hallway.

Later that evening when I returned home, I was able to look closely at the photo. The men were Army Engineers, not ‘prospector scientists!’

On my drive back to Albuquerque I pondered what I had seen and its significance. I had visited because of the site’s connection to events in my life, but what was in my mind was its relevance to current events.

When I wrote my memoir story about visiting Hiroshima, Remembering Hiroshima in 1962 and on 70th Anniversary, I learned that there was a second clock in the lobby of the Peace Clock Tower – the Doomsday Clock. While the Peace Clock Tower was built in 1967, the Doomsday Clock was installed in 2001. Even though the actual clock was not installed until 2001, the concept of the clock and its warning was conceptualized in 1947 by atomic scientists who had worked on the Manhattan Project and has been maintained by its members through the Bulletin of Atomic Scientists.

In its annual report to the world on January 24, 2019 the group announced: ”A new abnormal: It is still 2 minutes to midnight.”

I thought about my conversation with the teenage girl sitting next to me on the bus from the ranch.

“What are your thoughts about your visit to the Trinity site?” I asked.

“It is particularly relevant right now with nuclear tests and threats occurring in different countries,” I commented.

She nodded in agreement.

My mind then raced to my own granddaughter. How will the new abnormal impact her life? What will HER memoir story say?