Brodie Ancestors Characterized by Persistence and an Entrepreneurial Spirit

“Before I write about Dad and Uncle Bill, I think I need to write the back story of William Jonas, their father, and John, their grandfather, since their experiences – and perhaps genetics, deeply influenced their lives,” I told Chris as we were discussing family history recently.

We were introduced to John Brodie during our visit to Grant Lodge, the Family History Centre in Elgin, Scotland in 2001.

With his fast-clipped Scottish brogue, and hardly moving his lips, Graeme, the head librarian, oriented us to the various historical records. It was my first time doing family history research at a library and I felt intimidated. He suggested I get started by searching the surname database that linked to information from court records and newspaper articles. The computer database was in MS-DOS and very slow, and the references to the name Brodie were numerous and spanned from the 1800’s to the present. As I tediously scrolled through the records I didn’t see any familiar name and date combinations.

And then I came to the name William Brodie and the year 1849, and I knew I had a match! It referenced a court record. And then I spotted the name John Brodie, quickly read through the information, and then rushed to the adjacent room where Chris was searching parish registries on rolls of microfiche.

“Our great-grandfather and his brothers had a colorful past!” I exclaimed as I showed Chris some of the references I had found.

William, three years older than John, was cited in 1849 at age 11 for “…hanging upon coaches and other vehicles…greatly to the risk of injury and others”!

Next I found a reference to John Brodie In 1861, when he was 17 and an apprentice watchmaker, detailing a notice of a police complaint against him for “disorderly conduct and breach of the peace,” evidently from youthful over-indulgence.

The following year, John was apprehended again. The newspaper reported that he “wickedly and feloniously attacked and assaulted James Newlands, a Carter [someone who made deliveries by cart]…by striking him several blows on the face with his clenched fists, whereby he was felled to the ground bruised and injured,” 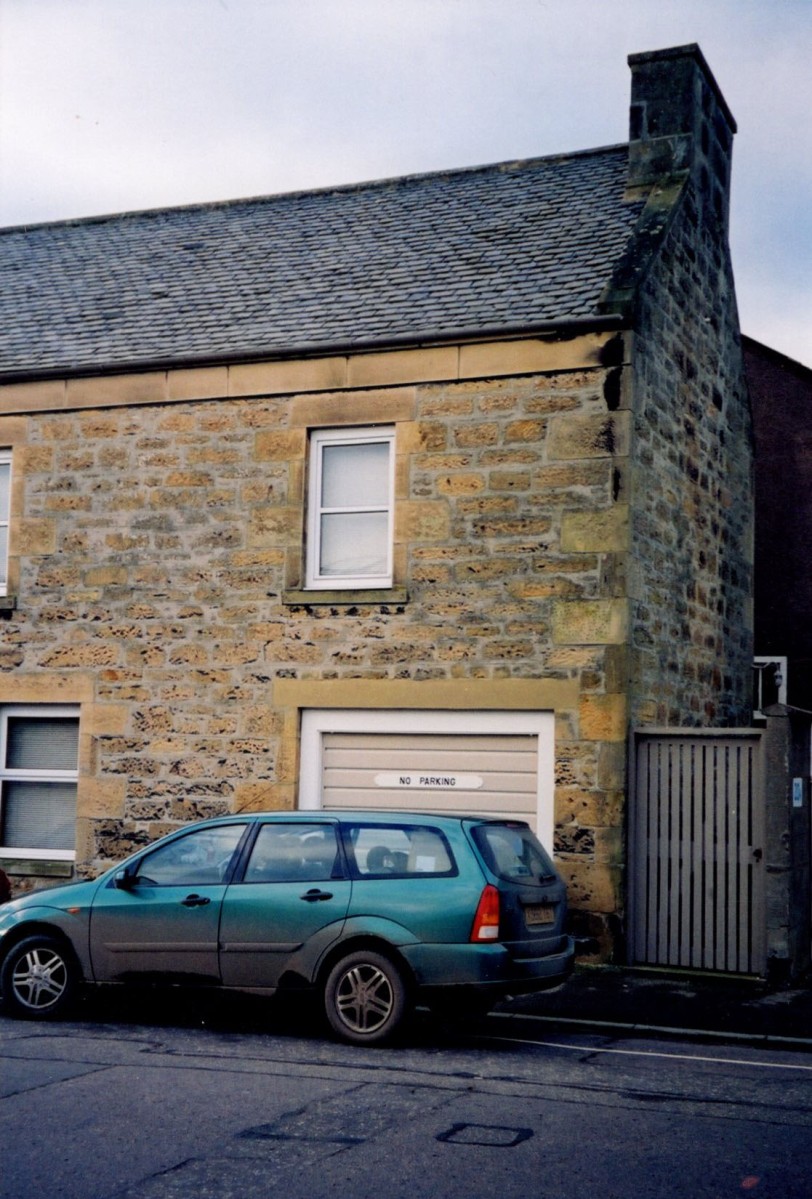 John was living with his family at 22 Abbey St., Elgin (above the garage)

Despite these incidences, John managed to complete his seven-year apprenticeship and went into business at 261 High Street, Forres as a watchmaker – not too far from Elgin. We found him listed in the Alphabetical List of Persons Entitled to Vote in the Election of a Member for the Burgh of Forres 1868, “BRODIE, John – Forres, Watchmaker, Occupier, 261 High Street. In 1868 he was not yet an owner.

By 1870, he evidently owned the business. We have wondered how someone that young had been able to finance such a business. Perhaps, he worked for and then took over the business where he was an apprentice. However, his tenure as a business owner was short-lived, ending in bankruptcy. One of the newspaper articles I discovered was from the Forrest Gazette in February 14, 1870, advertising an opening for a watchmaker to take over the “sequestered estate of John Brodie Watchmaker in Forres.”

Another watchmaker evidently was not found as the remaining stock of the business (watches, brooches, rings, fancy goods, etc.) were to be auctioned off a few months later on June 9 and 10.

When Chris and Bill and I had stopped in Forres in 2000 on our way to the Brodie castle, we did not know we had connections to the town.

“Do you remember walking down High Street on our way to catching the bus?  We walked right by that building,” Chris exclaimed after we located the address on a street view map. 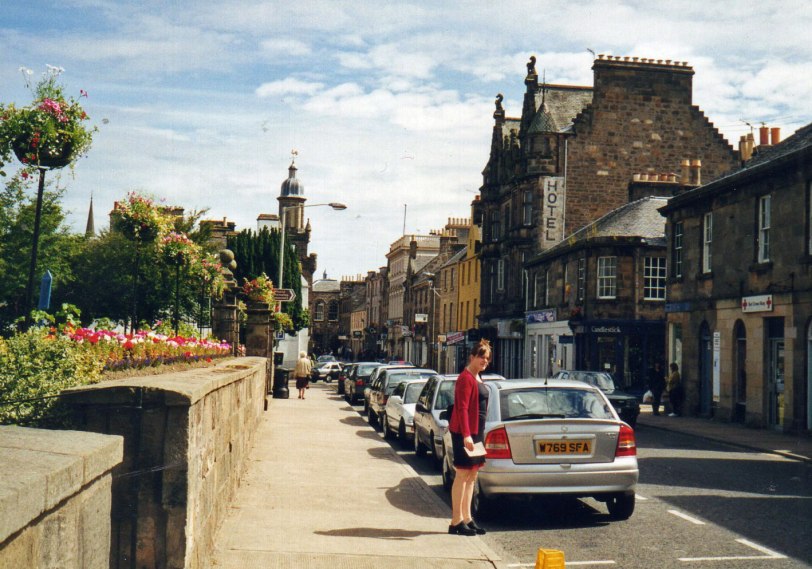 Little did we know…

A year after his business failed, John had emigrated to Ontario Canada, was working as a watchmaker and married to Eliza Jane Barry, daughter of a former Irish military officer. During the next 10 years they had four children. The second one, William Jonas, born in 1875, was our grandfather. His middle name, Jonas, came from Eliza’s father and grandfather, Jonas Barry.

Eliza Brodie died in 1884 shortly after giving birth to their daughter Mary, who also died, and John remarried in 1887 to Mary Holmes. A historical account describes the family by recounting that “All the children in the Brodie-Holmes family contributed to the family’s well-being by holding down employment, entering the carpentry, watchmaking, and blacksmithing trades.” From later records listing his occupation, William Jonas must have been the sibling that entered the carpentry trade.  Within the next few years, William and his two sisters emigrated to the U.S., settling in Chicago. Even though the historical document describing the family was based on the achievements of one of Mary Holmes daughters, none of the occupations of other females in the family are referenced.

Two years after arriving in the United States, William responded to the mobilization effort to recruit soldiers for the Spanish-American War and listed his occupation as carpenter. The war was short-lived and he was mustered out approximately six months later.

He reenlisted two years later and served three years. Our cousin Millie remembers Her Dad (Uncle Bill) relating that William would be reprimanded for fighting while on active duty and then “busted” or demoted in rank. He was a sergeant at several times and then demoted to “buck” private. While these incidents happened when he was in his mid-20’s, he seems to be repeating behavior his father exhibited and may have been the beginning of his struggle with alcohol.

Following his years in the army, automobiles were becoming popular with people of means. Since the early automobile owners had no interest in operating or maintaining their expensive vehicles, there was a need for chauffeurs – and William filled the need. Both the vehicles and their chauffeurs were symbols of luxury and there are a number of photos of John posing proudly with the owners next to their vehicle. 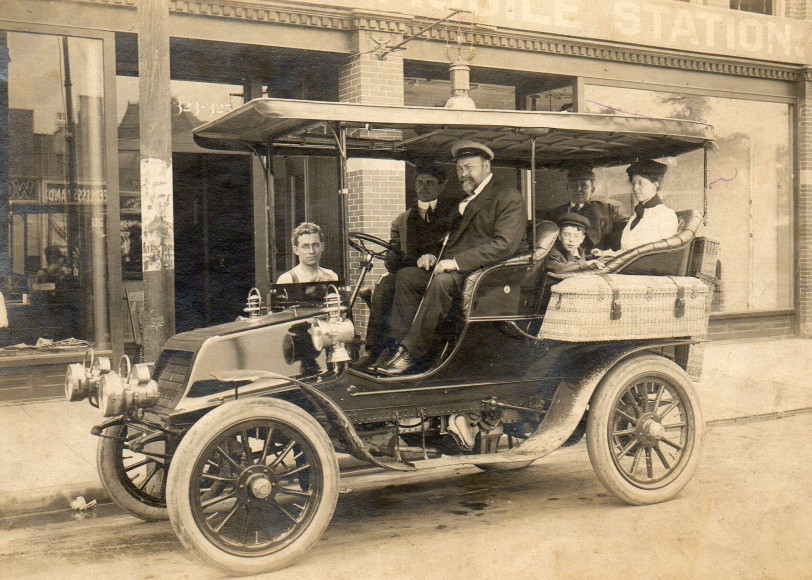 William Jonas (behind the wheel) with owner and family

An article in the Chicago Tribune in 1915 described the early days of the automobile in Chicago proclaiming that the local population “wondered whether driving induced insanity.” It included quotes from locals stating such claims as “A Catholic priest on the South Side called it ‘auto madness.’  A Tribune headline asked: ‘Is the Automobile Mania a Form of Insanity?’  And Mayor Carter Harrison Jr. remarked, ‘The natural tendency of a man operating an automobile is to run it at high speed.’

The article went on to state, “Chicagoans called automobiles ‘buzz wagons’ and ‘devil wagons.’  Reckless drivers were ‘scorchers,’ a word that originally described speeding bicyclists in the 1890s.  Motorists gathered on Sheridan Rd., a suburban thoroughfare, to enjoy driving together, much like today’s street racers. Wm. Jonas employer in 1905 lived along Sheridan Rd. and he evidently enjoyed the opportunity to gather with fellow chauffeurs and drive faster than the neighborhood appreciated.

“Look what I found!” Chris wrote in an email when she sent me a newspaper clipping she found on Ancestry. The headline announced that ‘EIGHTEEN AUTO SCORCHERS TAKEN BY POLICE’.  William’s name was listed among eight men apprehended by the police bicycle squad (the Chicago Police did not yet have vehicles of their own). While two of the men appeared to have received a fine of $15, staggering for that period of time, there was no amount listed after William’s name. Six months later he was apprehended again.

Clara Engler, emigrated from Berlin, Germany in April, 1906, joined her brother who was in Chicago, and subsequently became a nanny in the same household where William was a chauffeur. Three months after arriving in the United States, she and William were married. The Brodie men did not let any grass grow under their feet when they found the woman they wanted to marry!

By 1908, William was a chauffeur for a different family where the wife was the vice president of the Anti-Cruelty Society. Another newspaper article described this woman asking her chauffeur, William Brodie to take over her inspection of a filthy orphan asylum after she found it too ‘frightful.’ William subsequently had to testify in court about what he observed.

A newspaper advertisement at this same period of time mentioned that Ella Brodie was taking orders for doing embroidery on children’s dresses.

By time their first child, William Arthur, was born in 1910, John was again working as a carpenter – according to the occupation listed on William Arthur’s birth certificate.

The family moved to Florida in 1912 and lived in a tent while William built their house in Haines City, located between Orlando and Tampa. Their second son, Omer – our father, was born at home in 1915. “Daddy used to tell us how he remembered having his one week old baby brother’s cleft lip sewn up on the kitchen table,” our cousin Millie shared in a letter. It must have really made an impression on him, as Uncle Bill would only have been five at the time.

William’s WWI registration card, completed in Chicago in 1918, indicates that he had recently been released from the hospital due to a back injury. Perhaps this was during the time that Uncle Bill recalled his Dad going “up north” to find work. During that time, he sent things back to the family via the railroad. One of his gifts was a collie dog, much to the delight of the boys, but not Clara.

The family moved from Haines City to Tampa about 1920 and opened a grocery store at 827 Rome Ave. The family lived upstairs and operated the grocery for ten years until they left for CA. It must have been a rough neighborhood. In the memories Millie shared in her letter, she relayed “the neighborhood boys knew not to mess with the ‘Brodie boys’ because they were pretty rough and tumble.” A newspaper article in early 1928 relates that the previous Halloween a group of teenage boys had surrounded the store and hurtled bricks at it.

Florida experienced an economic downturn in the late 1920’s, which probably affected the grocery business. At the time of the 1930 census, William was in California and Clara and the boys were still in Florida trying to keep the grocery store going, with the boys supplementing the family income with their paper routes.

Uncle Bill had just completed the 11th grade when the family left Florida to join William in California. Following the pattern of the Brodie men who came before him, Bill secured work to help out the family – and unfortunately was never able to return to school.

While nothing is documented, one of the things our Dad didn’t talk much about, but definitely influenced his later life, was living with a father who was an alcoholic.

A 1933 business directory in Los Angeles lists William’s occupation as carpenter. Like Brodie men that came before him, Uncle Bill was an entrepreneur and opened his own radio repair shop 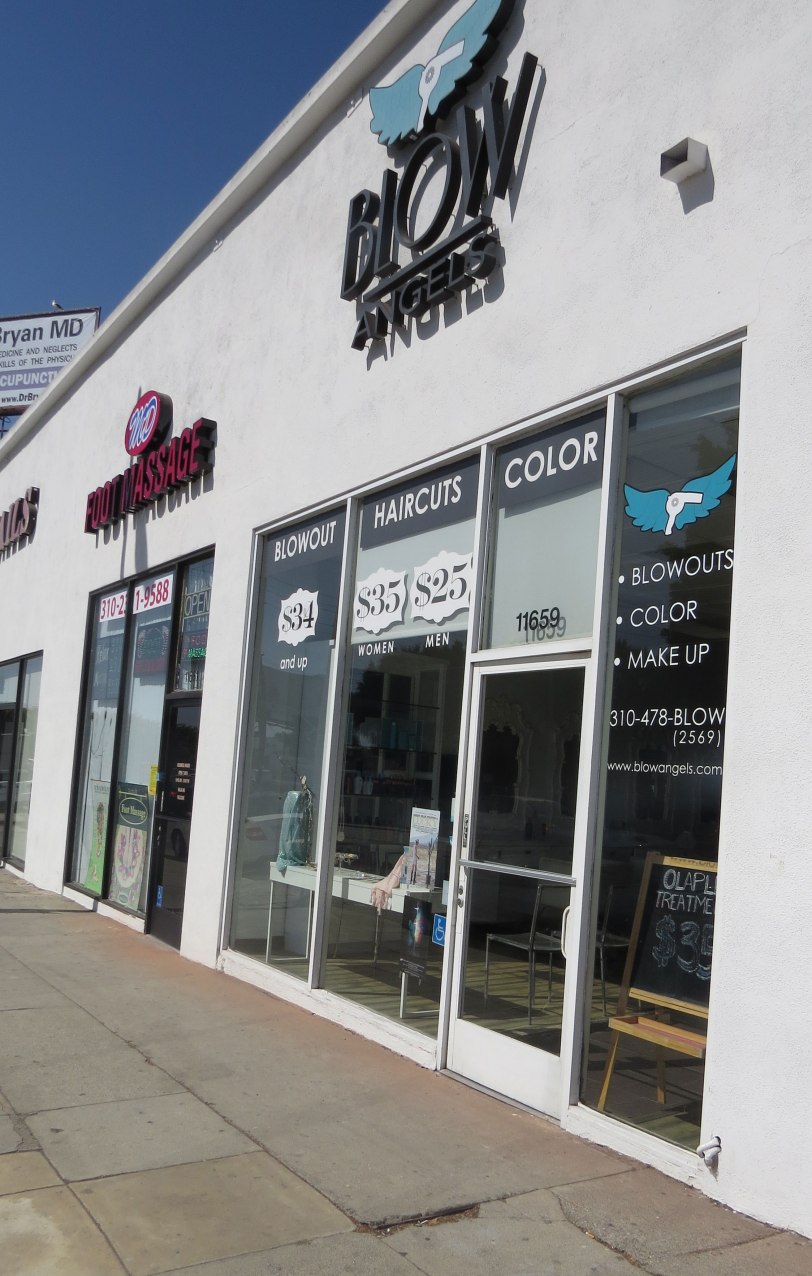 and Omer attended University High School. The 1936 and 38 directories do not list an occupation for William.

William died in 1941 at age 66 and is buried at the Veteran’s Cemetery in West Los Angeles. I was the only one in my family who had not visited the cemetery. Last fall I walked across the acres of grave stones with my son, daughter-in-law and granddaughter to reach the section containing his grave.

As I gazed at the marker commemorating his service in the Spanish American War, I marveled at his willingness, as a new immigrant and non-citizen, to answer the call to join the Cavalry.

3 generations of descendants of William Jonas

As I look back on the lives of John and William Jonas Brodie, I see two men who, each in their own way, persevered through hard times, took advantage of opportunities, and were entrepreneurial.